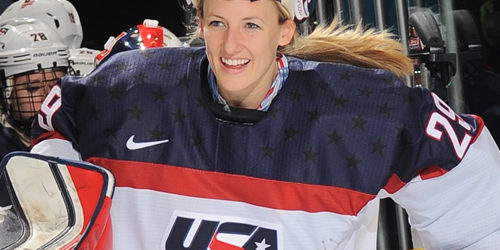 Brianne McLaughlin is right at home on the ice, having started skating in Ohio at age 5. As a college goalie for the Robert Morris University Colonials, she stopped 3,809 of the 4,188 shots she faced, recording a .910 save average. In 2010-11, Brianne was drafted by the Burlington Barracudas in the Canadian Women’s Hockey League, and also picked for the U.S. National team. She hopes to continue to compete on the U.S. team for the foreseeable future. Currently, Brianne owns and operates a goalie training facility just north of Pittsburgh.

“It’s an everyday commitment—it’s all on you to stay fit, healthy, and motivated. There are a lot of sacrifices to be made, but I love competing, the challenges, and meeting goals.”