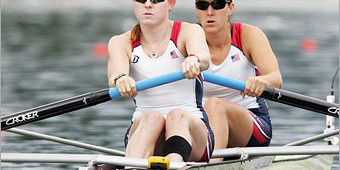 Little did this two-time gold medalist of the Games know that when her mother happened upon an article in The Wall Street Journal proclaiming that there was a large number of rowing scholarships available for women, it would change her life. “When I attended Phillips Andover in high school, rowing was available,” Caroline said. “One week in and I was hooked!”

Flash forward and Caroline is not only on the US national rowing team, she’s also a four-time women’s eight rowing champion at the summer Games and a four-time World Champion. Dedicated to her craft, she practices intensely with her team two to three times a day, six to seven days a week—her least favorite exercise being stationary biking. “Every day as I train with my incredibly talented and powerful teammates they push me to be better, faster, and stronger,” Caroline said.

Caroline says much of her success in rowing has come from overcoming mental obstacles. “When your brain is telling you, ‘Stop! It hurts too much!’ You need to tell it, ‘No! We’re going…and we’re going NOW!’ It’s that moment when you push past the impossible, that you achieve it.”

“When I pulled my indoor rowing machine outside facing the lake and the mountains, I had exactly what I needed: the cool, early evening air, and my Shaklee Life Energizing Shake.”