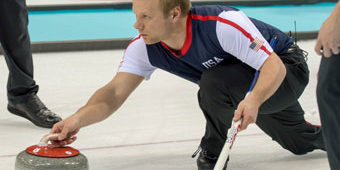 Rock throwing is a lot harder than it looks

A middle school science teacher when he’s not competing, two-time Winter Games competitor Jeff Isaacson finds throwing rocks—as the polished granite stones used in the sport of curling are called—much more of a challenge than it looks like on TV. “The sport requires a tremendous amount of time and dedication,” he said. “A typical practice can last anywhere from one to three hours, and I’ll throw as many as 96 (42-pound) rocks.”

Jeff’s team of elite curlers usually competes at an event every other week. Depending on the time of year, the team often plays back-to-back weeks. During the four-day competitions the team will play up to three games per day. “One year alone, we spent nearly 180 days competing around the world at various events,” said Jeff, who tries to practice daily when not traveling for a competition.

So what motivates him to achieve excellence at the world-class level? “I wanted to push myself to see how far I could get and what I could achieve,” Jeff said. “I enjoy practicing and getting better. One of my favorite quotes is: ‘Everyone has the will to win, but few have the will to prepare to win.’”

“Prior to the Sochi Games, I discovered Shaklee Physique®. Mixed with milk, it’s my favorite drink.”