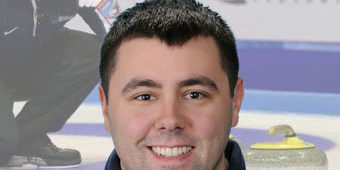 A civil engineer who manages energy pipeline projects across Minnesota and Wisconsin when he’s not throwing 42-pound rocks down the ice, John began participating in curling at an early age. He was introduced to the sport by his father and grandfather. From there, he began competing competitively at local bonspiels (as curling tournaments are called), ultimately earning a coveted spot on the U.S. National team.

Among Winter sport athletes, curlers are the “regular” people. But they still train harder and monitor their diets far more than players of old. For John, as with most elite curlers, that training includes a grueling travel schedule that takes him all over Canada and the US on long curling weekends. He travels internationally to events, too. All of which puts more than a little bit of stress on his daily schedule of balancing his work and his sport.

With a recorded history that goes back to 1541 in Scotland—where curling quickly became the most popular game in the land; more popular even than that other well-known Scottish sport, golf—curling continues to grow internationally.  “When many people see curling for the first time they think, ‘Hey, I can do that.’ But once they step on the ice, they gain a respect for the sport,” explains John. “You often hear people say they find muscles they didn’t know they had after a couple of hours sliding and sweeping stones.”

All those years of training and competing paid off with a gold medal at the 2018 PyeongChang Winter Games.  In a pressure-packed game with the entire world watching, John and his teammates were nearly perfect through eight “ends,” or periods, in which they delivered the knockout punch with a perfect throw that put them out of reach of the favored Swedes, who settled for the silver medal.  Possibly one of the least-known or little-watched sports in the Games before Team USA made a historic comeback run in the tournament, John and his teammates swept up the country with their grit, skill, and determination.

“It’s easier watched than done,” said John, “but we sure enjoyed our moment!”

“I’m pretty sure I haven’t gone a day in the last few months without using at least one Shaklee product. Love them!”