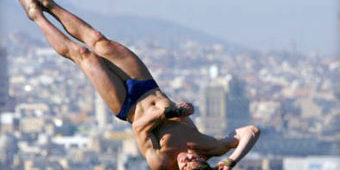 Diving in to win

Raised in a family of divers and swimmers, Justin Dumais’ entry into the sport of diving came about largely by accident—namely his brother landing on his head on the deck of a neighbor’s pool. In an effort to keep their children from killing themselves, Justin’s parents signed them up for diving lessons. Eventually, all five Dumais siblings became competitive divers, with Justin and his brother, Troy, placing 6th in the synchronized diving event together at the 2004 Summer Games in Athens. Justin was also selected as an alternate for the 2012 Games in London.

When competing, Justin completes two three-hour water workouts per day. Throughout the day he also does 5- to 10-minute weight workouts and kettlebell training sessions to maximize his recovery and prevent overtraining.

Following the 2005 World Championships, Justin retired from diving to fly an F-16 jet for the Air National Guard. But after six years and a tour of duty in Iraq, he returned to diving to prepare for the 2012 London Games. “I just missed the competitive nature of the sport so much,” he said. “The journey has always had its difficult moments, but I just truly love the sport.”

“I spent my entire life getting ready for seven seconds of (diving) competition. Split-second timing is now pretty much what I do every day flying F-16s.”