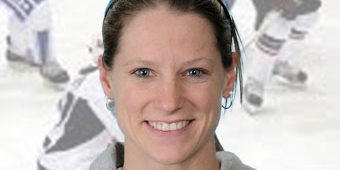 Defensewoman Kacey Bellamy has been a key player in helping the USA Women’s Hockey Team win two silver medals in the Winter Games, but she always knew there was more she could achieve.

And in 2018 an the Winter Games in Pyongyang, she and her teammates proved it: They won the gold medal by defeating Canada in a thrilling shootoff for the ages.  Kacey was an integral part of that victory, and most of the victories by the US Hockey Team in the past decade.

A 2009 graduate from the University of New Hampshire (UNH), Kacey was a five-time, four gold medal-winning  member of the U.S. Women’s National Team in the IIHF World Women’s Championship. She was an assistant captain for Team USA in 2012 and 2013, and named one of the team’s Top-Three Players in 2009. She was also an eight-time member of the U.S. Women’s Select Team for the Four Nations Cup, and twice skated for the Under-22 Select Team that competed against Canada in 2007-08.

At UNH, Kacey ranked third in all-time career points by a defensewoman, earning RBK All-America First Team and Hockey East First Team honors as a senior. She was also named UNH’s Jim Urquahart Student-Athlete of the Year during her college career. Her greatest personal disaster? “Getting cut from the development team right before my sophomore year. After that, I told myself I would do whatever it took never to get cut again,” she says.

No doubt, Kacey has been a hard-hitter on the ice, but she has also made in impact outside the boards as well—after  three seasons of professional hockey with the Boston Blades, where she helped her team win the Canadian Women’s Hockey League’s Clarkson Cup in 2012-13, Kacey has joined the collegiate coaching ranks. In 2014-15 Kacey began her first season as the assistant women’s ice hockey coach at Merrimack College, located in North Andover, Massachusetts just north of Boston. In 2015-16 the program made its competitive debut in the ranks of Division I schools.

But serving in the coaching ranks doesn’t mean she’s sidelined as a player—quite the contrary.  Kacey continues to clog up opposing team’s play with her outstanding defense for the US Team, and could conceivably add to her medal tally in 2022.  “Anything is possible,” said Kacey, “when you love what you do and work hard, hit hard, and want to win!”

“Playing boys hockey made me competitive and mentally tough. The stronger competition made girls hockey easier. The most important things I learned are to work hard and be humble in everything.”