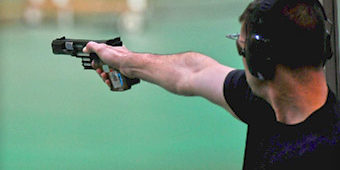 He pulled the trigger on success

In 1996, Keith Sanderson was the type of US Marine who wanted to be the best at everything—and the Marine Corps, he said, “puts a big emphasis on marksmanship.”

So he practiced. A lot.

Keith’s swift ascent in the sport of men’s rapid-fire pistol shooting included a fifth-place finish in the 2008 Beijing Games, and culminated in 2009 when he won an unprecedented three medals in World Cup matches and was ranked as the best rapid-fire shooter in the world. A devastating forearm injury in 2010 cost him his No. 1 ranking, but after extensive rehabilitation and refining a new technique, Keith qualified for another shot at the top spot in the 2012 London Games.

Currently, Keith’s a Hawaii-based Pacific Army Reserve sergeant and marksmanship instructor for both the US Army and Marine Corps.

“Teaching our soldiers to learn how to make their own amazing improvements helped motivate me to perform better myself.”