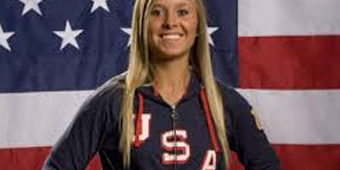 Eyes on the prize

Kelli Stack’s love for hockey and love for dogs unexpectedly came together in 2014 Winter Games in Sochi, where she won her second silver medal, after winning her first in Vancouver in 2010. While in Russia, she won the heart of a stray five-month old German Shepard pup in the athlete village. She adopted the dog, brought her home, and named her Shayba after the arena where she competed and the word for hockey puck in Russian.

Kelli’s collegiate experience includes playing an integral role in helping Boston College reach the Frozen Four and its first title game in 2007. Professionally, she’s played several seasons with the Boston Blades of the Canadian Women’s Hockey League, and even skated in a professional league in China.

To Kelli, the most challenging aspect of competing in ice hockey is the wear and tear it puts on her body. “The older we get the harder it is to recover and stay healthy,” she says. “The hockey season is a long and demanding one that requires nonstop training.” Her long-term athletic goal? “I want to make an impact in youth hockey players’ lives through coaching, and to continue training and playing as long as my body allows.”

“I want to be a part of the best team in the world, so coming in first is what motivates me.”