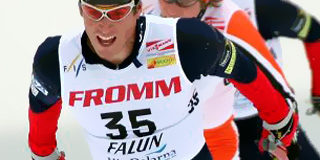 As a four-time winter games competitor, cross-county skier Kris Freeman is all about breaking new ice. Kris, aka “Freebird,” has won 16 national championships, placed fourth at the 2009 World Ski Championship (missing the bronze medal by a mere 1.3 seconds), in addition to competing in three grueling events at the Games four times. He was also one of the first endurance athletes with type 1 diabetes to compete at an elite level.

Kris admits he was crushed when he first heard the news that he was diabetic and feared it meant the end of his athletic career. But it didn’t take long for this determined athlete—who has been competing since age 5—to realize he wouldn’t let his condition get in the way of his dreams. Moving forward, Kris has learned as much about his condition as he could. “Being diabetic hasn’t changed the way I train, but it’s definitely changed the way I prepare to train.” He checks his blood-sugar level as often as he needs to and relies on a sophisticated insulin patch-pump to ensure that his body is in its optimal state.

In addition, Kris also uses a number of Shaklee products. “As an athlete, I’m always putting my body under a lot of strain. It’s nice to know that Shaklee is there with a wide array of products to help me get the nutritional aid I need.”

Kris says he hopes to be an active voice in the diabetic community in the future. “There are no limits to what someone with diabetes can accomplish as long as they stay on top of their condition. There is absolutely no way diabetes should get in the way of your dreams.”

“I’ve used Shaklee Glucose Regulation Complex every day for the past six years. It makes a huge difference in the stability of my blood sugar.”