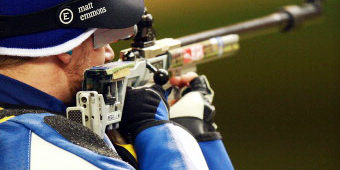 His sights are always set on gold

New Jersey native Matt Emmons has been around guns his entire life—many of the men in his family were avid hunters, as was Matt. But it wasn’t until he was introduced to an FBI firearms instructor at age 14 that Matt’s hobby became his true passion. “He saw that I was good with a rifle and asked me if I wanted to give it a try as a sport,” Matt says. “I said, ‘Sure, why not?’”

Rifle shooting, as a competitive sport, includes three separate events; Matt excels in all three. After winning a gold medal at the 2004 summer games and a silver in 2008, Matt completed the cycle with a bronze medal at the 2012 Games in London.

Despite his success on the world’s biggest stage, this four-time NCAA national champion still aims high. “Naturally, I love my sport and I enjoy trying to continually improve and see just how good I can be,” he said. “(But) there are certain parts of my game where I still believe I haven’t seen my very best.”

“One of my life goals is to be active and healthy well into my 70’s and 80’s—and hopefully longer! I know that regular exercise and good nutritional habits are part of that. I also believe a sound mind is a key ingredient to being successful in any walk of life, whether it be sport, business, or just for general happiness.”

“I make sure I have a good nutritional base, and Shaklee products are an important piece of that puzzle in and out of competition. I use them on almost a daily basis.”