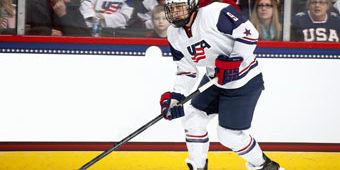 The best defense is good offense

As one of the top-scoring defensewomen on both her University of Minnesota Golden Gophers college team and in the national collegiate rankings, Illinois-born Megan was also the team’s captain. A silver medalist in the 2014 Sochi Games, she’s focused on winning gold and aspires to play for the U.S. National Team again in future games. In 2014, Megan was the second overall pick in the Canadian Women’s Hockey League draft. She now plays professionally for the Toronto Furies.

“Hockey is a year round regimen. We do not have an offseason. It takes a toll on our bodies, mentally and physically. But what we do is so worth it!”