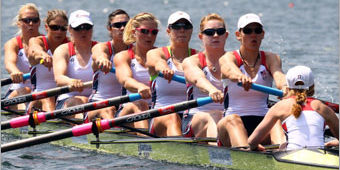 Meghan Musnicki’s seat in the gold medal-winning U.S. women’s eight boat at the 2012 Games in London didn’t come easy. She didn’t go to a traditionally strong rowing college, and she was cut from the national team time and time again—in 2005, in 2008, and in 2009—but she didn’t give up. “I just kept pushing to keep my dream alive. Finally, in 2010 I broke through,” Meghan said. And what a breakthrough it was. “We won a world championship in New Zealand that year and I haven’t looked back.”

Since 2010, Meghan’s been a solid performer in the US women’s eight every year. She also won world championships in 2011, 2012, and 2013—a year in which she doubled up by competing in the US women’s pair (two rowers) and finished fourth in the world. She also took a bronze medal in pairs at the 2013 Samsung World Rowing Cup III, and a silver medal in both pairs and eights at the 2013 Samsung World Rowing Cup.

As committed as ever to her sport, her teammates, and her dreams, Meghan is training to compete and medal again at the Summer Games in Rio in 2016. “I believe that my success is not just a result of hard work, but of overcoming obstacles. Those challenges have taught me that you can overcome anything…and you can live your dream.”

“I just didn’t stop. I wanted to stop numerous times, but stopping doesn’t get you any closer to the gold medal.”