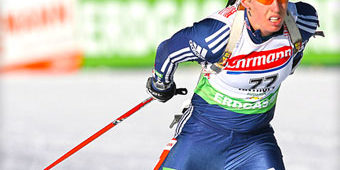 Sacrifice comes in many forms

“Tracy is tough as nails and nothing ever gets to her,” said Lanny, who also competes in the grueling sport that combines arduous cross-country skiing with accurate rifle shooting.

That toughness comes in handy during a demanding training schedule that begins in April and extends through November—and then transitions immediately to an exhausting race season that endures through March. To the twins, however, all the time and effort is a worthwhile sacrifice.

But perhaps the biggest sacrifice Tracy is known for was giving up her place on the 2014 U.S. team so that her sister could compete. Lanny came down sick during the qualifying trials and narrowly missed out on a spot. Tracy, who made the team although her sister was having a better overall season, gave up her spot when she realized that Lanny would be next in line.

“It takes commitment and dedication to compete at the highest level in biathlon,” Tracy says. “So to compete with the best, you have to train like the best. And that means giving your body the fuel it needs to perform at its best, too.”

“Love is selfless dedication. And sometimes it means giving up your dream so someone else can realize theirs.”