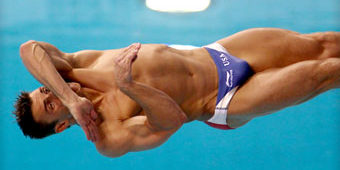 Making a big splash in diving

Troy is simply the most successful sibling in a family of five very competitive divers. He has represented the United States in the summer games four times: 2000, 2004 (where he competed alongside his brother Justin), 2008, and 2012 (where he won a bronze medal in the synchronized 3m diving event).

Troy started diving in California in 1984 when he was just 4 years old. “I had to learn every stroke in swimming before I was able to go in the deep end of the pool. Once I learned the strokes I had to swim 20-25 yard lengths in the deep end before I could step onto the diving boards,” he said. “I remember a lifeguard telling me I couldn’t do it. That moment is what pushed me more: if anyone tells me I can’t do something then I’ll figure it out, push myself hard, and never give up till I accomplish what they said I could not do!”

Pushing himself mentally and physically is something Troy excels at. “I have been really pushing my weight lifting programs to the maximum, which is making me stronger than ever, but it’s allowed me to know that I can perform all my dives at the best level. Knowing that makes flexibility, confidence, mental preparation and visualization so much easier,” he said. “In practice, I now focus on quality of my dives, and not just their quantity. I trust my body movements while being more focused, and I’m mentally and physically prepared for every training and competition day. Lastly, I try to make diving, training, and competing more enjoyable and fun! The hardest thing in sports is making it fun when you’ve been doing it for so long.”

“With Shaklee, I feel like I recover faster and am more mentally prepared for all daily tasks, work, and training sessions. It also gives me a great schedule and eating pattern to stay positive, have the energy to perform, and stay in the best shape of my life.”