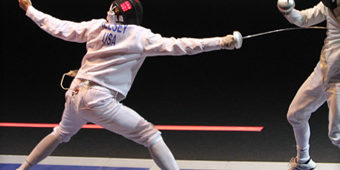 He fights to win

After trying a number of other sports (basketball and kung fu among them) Seth Kelsey tried épée fencing and stuck with it because, “I really liked the one-on-one nature of fencing. It’s a fun combination of physical and mental ability.” Although he claims he was “terrible” his first year, Seth is now one of the most experienced and accomplished U.S. épée fencers of all time, solidifying his position with a 4th place finish in the 2012 London—the highest ever for an American men’s épéeist.

A 3-time summer games competitor, Seth was also a member of the first U.S. men’s épée team ever to earn a medal at a World Championships—a silver at the 2010 World Championships in Paris. As a Second Lieutenant in the United States Air Force Reserve, Seth says, “You have to be ready to fight to win, and our entire men’s épée squad has proven through individual and team results that we’re fighters. Every bout you have to fight—even in practice. You have to say, ‘It’s practice, and I’m down 4-2, but I’m going to fight…and I’m going to win.’”

Seth trains five days a week. “We have four fencing practices with bouting, footwork, and drill,” he says. “We also have three lifting sessions and two agility/speed workouts. Add two one-hour lessons with our resident coach and there’s little left at the end of the day.”

“What motivates me? There’s nothing quite like the thrill of victory. But while everyone wants to win, not everyone hungers for it.”